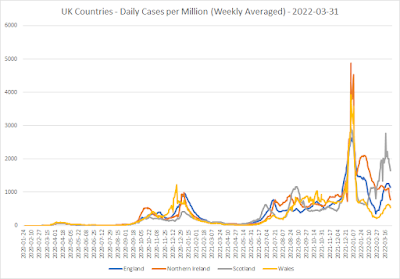 Two and a half months ago, I reported on the then COVID situation in the UK, here: [[1]]. On that occasion, I was upbeat about the prospects for defeating the virus in the UK in the fairly near future. I went so far as to say: “Get fully over this hump, and herd immunity may prove to be a lot closer than it looks at first sight.” I was, however, a lot less upbeat about the prospects for some of the other European countries.

So, today I’ll review the situation with the benefit of two and a half months’ worth of further data. On this occasion, I’ll look not just at the UK and its neighbours, but at Europe as a whole. To avoid data indigestion, I decided to split the paper into three parts. The first will address the individual countries which make up the UK. The second will address my “core Europe” group of 14 countries, including the UK. The third will look at the remainder of Europe, from Greenland to Russia to Cyprus to Gibraltar, and all points in between.

I took the data for all three parts of this paper on April 1st, 2022 from the following sources:

All the data runs up to and including March 31st 2022. Although the most recent data will necessarily be subject to change as late reports and adjustments come in.

Here are the current new cases per million (weekly averaged):

In Northern Ireland, new cases per million (weekly averaged) have dropped from a peak of almost 4,900 at the new year to the current figure of 772; a lowering of the new case rate by a factor of more than 6 over three months. England and Wales have followed similar paths, dropping from the new year peak to a minimum, then rising again to a substantially smaller peak, which appears to have been passed during the last week. In England, the new year peak of around 2,630 has come down to the current value of 1,140, and in Wales the corresponding figures are 3,920 and 542.

Here are the same figures, looked at in terms of weekly case growth:

Now that looks pretty healthy – new cases on a week-to-week basis are now dropping substantially in all four countries.

To give a view of the regulatory backdrop against which all this has been happening, here is the graph of lockdown stringencies for the four countries: 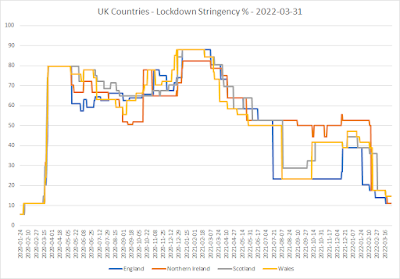 Here are the lockdowns currently in effect: 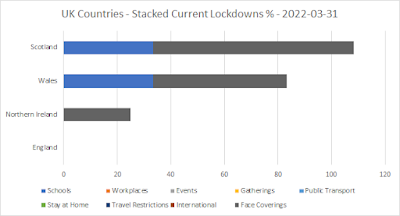 Since March 18th, England has had no lockdown measures in place at all. Not even checks on incoming travellers at the UK border! Since March 21st, Northern Ireland has had a face mask recommendation only. Wales and Scotland have both had school closures recommended (but not mandated) since March 18th. Both have a face mask mandate, too. In Wales it is “required in some places,” and in Scotland “required when with others.”

Looking at the spurt in Scottish cases beginning at the end of February and lasting about three weeks, their face mask mandate doesn’t seem to have done them any good at all!

At this stage, with new cases falling under a light or non-existent lockdown régime, a high level of COVID testing – however useful it may have been earlier in the epidemic – is now coming increasingly to seem an irrelevance. Indeed, free COVID testing was discontinued in England with effect from April 1st. Therefore, I shall not be looking at testing data for this paper.

As to vaccinations, within Europe the vaccination levels in most countries are sufficiently high and sufficiently close to each other, that I don’t expect to be able to see much difference in the figures between low and high vaccinated countries. That will have to wait for a later review, on a world-wide scale.

Here is the COVID hospital occupancy per million for the four constituent countries: 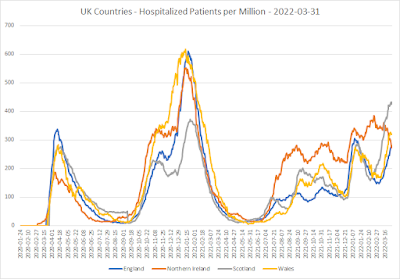 At first sight, that graph looks like bad news. COVID hospitalizations have been erratically trending upwards in all four countries since the arrival of the delta variant in summer 2021. They are still going up in England, and steeply so in Scotland. But they are clearly on the way down now in Northern Ireland, and the Welsh seem to have just about turned a corner. As more and more recently infected people recover, and assuming new cases continue to drop, this will inevitably reduce the pressure on hospital beds in the next few weeks. 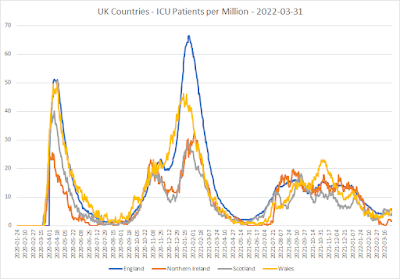 The last nine months or so in the ICUs look like “a tale of two halves.” Generally increasing COVID occupancy up to late October, then decreasing again. This presumably reflects the lower severity of the omicron variant compared with delta. I don’t see any evidence here of any danger of ICUs becoming a bottleneck in the future, as they were in early 2021.

Here are the deaths per million: 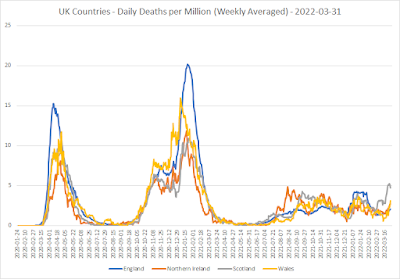 COVID deaths have gone up significantly recently, particularly in Scotland and Wales. Looking back at my previous review, I predicted that we would see COVID deaths drop off about the end of January. That did indeed happen; but a new rise in deaths began around the middle of February. Here is the same data looked at in terms of deaths per case: 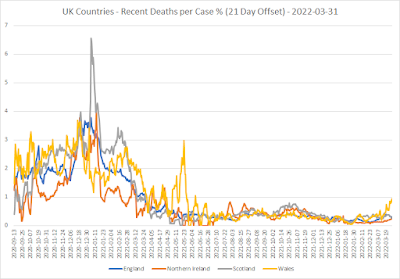 There is a recent rise in deaths per case in Wales, and to an extent in Northern Ireland. Whether this is down to a new and more lethal variant than the original omicron, or simply to a backlog of patients who contracted the disease in the new year when cases were high, then “held on” for longer than 3 weeks before dying, by which time cases had dropped again, remains to be seen. What I will say, though, is that once cases start to approach zero, deaths per case from 21 days before will become all but irrelevant.

The UK now seems generally to be in good shape when it comes to getting rid of COVID. Absent something quite unforeseen such as a new and even more transmissible variant, I expect cases to decline from here on in. With concomitant declines, after a lapse of time, in COVID hospitalizations, ICU occupancy and deaths.