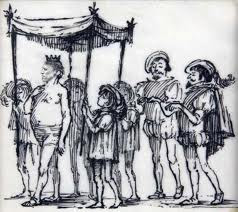 Emperor Boris, lying nude in an Indian hotel bed, heard a noise. He got up, milled about, then stared at the formal-looking letter, which had been pushed under the door of his room.

“The Indian government has decreed that you may only travel inside, or leave, our country on foot or by bicycle,” it said. “We are a poor country, but we are developing; and we want to make travel by car and aeroplane affordable for all our people. But you have sought to make driving and flying so expensive for British people, that many will be forced to give them up. Yet, you yourself use these means of transport at the expense of the people you are supposed to serve. You have shown yourself up as a hypocrite.” It was duly signed and sealed.

He tried his mobile phone. Dead. His computer. No Internet connections available.

There was a banging at the door. An assistant manager of the hotel. “Mr Johnson,” he said, “your credit has been declared invalid by all the major banking systems. You are in default. You must leave this room within fifteen minutes.”

Boris discovered that all the clothes he had brought for the trip had been removed from the room. So, he went nude to the hotel reception, put on his Bullingdon Boy act, and loudly complained. The lady receptionist laughed. “I’ll sue you!” Boris yelled. She laughed again.

A suave gentleman in a grey suit came, and said to him: “By holding parties during COVID lockdown, you have broken laws you yourself made. You have rejected the rule of law. How, then, can you expect anyone to obey any law you made? And how can you expect law to help you, even when you are a victim? But anyway, our new Indian law says that you must leave this hotel, and walk or cycle back to England.”

“In my birthday suit?” Boris expostulated. “That should be illegal. It’s indecent exposure!”

The suave gentleman replied, “We make the laws here, not you. But what other dress is fit for an emperor?”