Bad laws are the worst sort of tyranny

This morning (July 24th, 2020) I went to my local Waitrose. There was no queue, but I was bawled out by the woman on the door for not wearing a face mask. At the time, I was not even aware of the idiot legislation just passed. I asked her if she wanted to stop me going in to the store. She demurred. I did my shopping in about 10 minutes. At the checkout, I was behind a lady who had obeyed the latest idiocy, but complained about it. The checkout operator, knowing me, said nothing about masks.

Now, are “face coverings” efficacious? Anything less than a military-grade mask doesn’t protect you against inhaling the virus. The argument for wearing a mask is that it protects others. But does it? When you take the mask off, where do the viruses go? Think about that.

And if the government really thought that masks were effective to stop the virus, why didn’t they mandate them back in March? Or, at least, April, by which time entrepreneurs would have had time to produce enough masks for the general public?

As Edmund Burke said, 250 years ago: Bad laws are the worst sort of tyranny.


Posted by Neil No comments:

Mr Lock's lockdown locks: and what happened to them 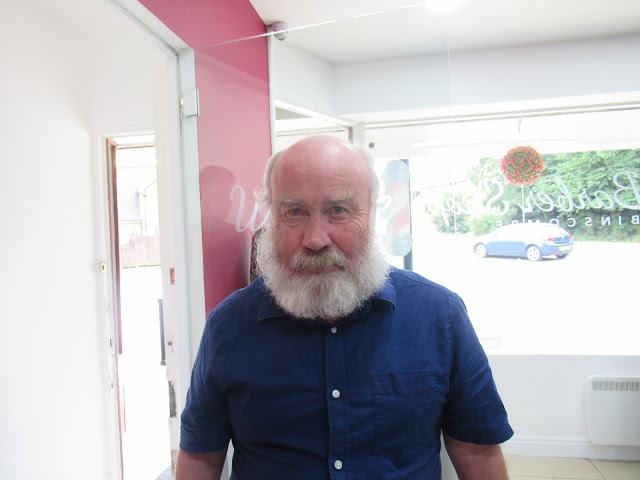 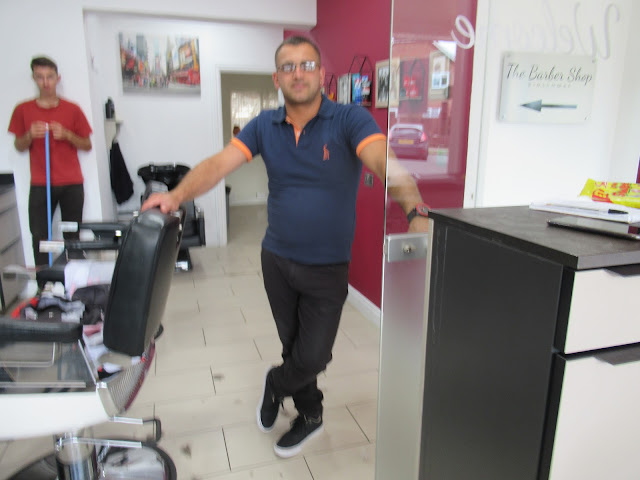 Amico, era peloso. Ma non pericoloso!
(Translated from the Italian: My friend, that was hairy. But not so dangerous...) 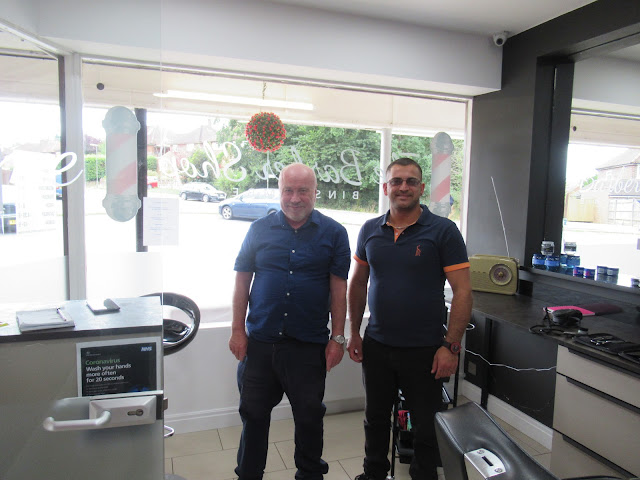 Doctor and patient enjoy reminiscences together 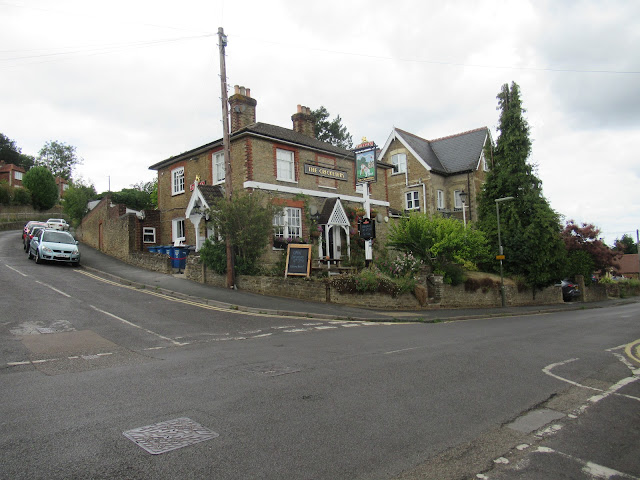 "The Cricketers" may be open, but where are the cricketers?

The decision to allow Premier League footballers to play, while ordinary cricketers were still denied their (far better socially distanced) game, may well come back to haunt Johnson.

The Darn-Poor Rhymer has been silent for almost six months. But yesterday, I was contemplating a phrase of a melody I had composed a few months before; which my brass band and our young cornet soloist were about to start practising, when the COVID lockdown happened. We haven’t met since; and no-one seems to have any idea when we’ll be allowed to practise together again. Let alone hold a concert. Anyone that tries to make out that the lockdown is over, is both deluding themselves and bullshitting us all. (By the way, I have a barber appointment for Monday).

I realized that this melodic line was about as simple as you can possibly write in the Western tradition. An upward scale of C, down and back up again in the scale of A flat to a top C, then a downward scale to a pause on E (the first time) or G (the second). The rhythm, though, is a complex one (7/8), and the effect when the Sibelius program plays it back is magical. It’s a pity I can’t post the .mp3 on Blogger (sigh).

That realization set the Darn-Poor Rhymer going. This is what he wrote:

Eight billion monkeys
Each with a keyboard,
Writing songs at the speed of light
For the duration of the Universe.
Will they find all the melodies?
Eight bells in the church tower,
Eight monkeys each with a rope
Pulling now faster, now slower,
For ever and ever; so be it.
Can they play all the melodies?
As Kurt Gödel showed us
Some truths are not provable inside a system.
And as I’m showing you here
Music is greater than your imagination;
Music is infinite.
If there’s a god, is he in our finite Universe?
If not, why bother about him?
But if he’s in our Universe, he too is finite;
So, he can’t conduct all the melodies.
Or maybe he exists (or not), but we can’t prove it?
Now, I hope, you’ll understand why I’m agnostic.
Posted by Neil 2 comments:

Is the UK government misleading the public on COVID tests? 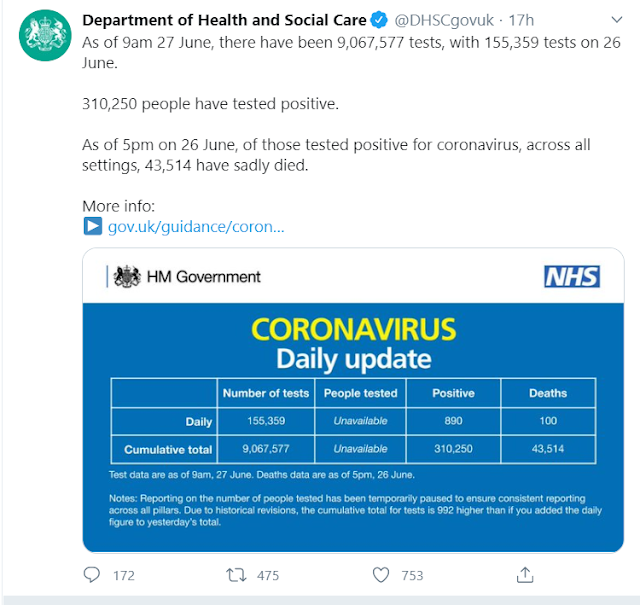 So, that’s over 9 million COVID tests done in the UK up to June 27th a.m. Sounds pretty impressive, doesn’t it? As of today (July 1st), that count has moved on to 9,426,631 – fourth in the world in total tests! (The UK is also fourth in the world in COVID deaths per million population, and closing in on Andorra for third place; but that’s another story). Now… is that figure believable?

I recently wrote a paper about understanding the published statistics – deaths, cases, tests – on the effects of this virus around the world. It is very long, and a little bit technical – although it does include lots of pretty (and not so pretty) pictures! Those interested in the detail can find it here: https://wattsupwiththat.com/2020/06/20/covid-19-understanding-the-numbers-coronavirus/. I had a bit of a laugh when one commenter at “the world’s most viewed site on global warming and climate change” mentioned me (though, I must say, not totally approvingly) in the same breath as Judith Curry, who is a true climate-science expert!

In the course of writing it, I compared the two primary sources of world-wide statistics on this virus. One is worldometers.info, https://www.worldometers.info/coronavirus/. This is kept updated daily with data provided by the national health systems. The other, far more comprehensive because it includes historical daily data from the beginning of the epidemic, is Our World in Data, https://ourworldindata.org/coronavirus. I used Our World in Data.

So… the daily Twitter update, shown at the head, gives the numbers of new cases and deaths on the day in question as 890 and 100 respectively. I’d expect those two numbers to appear in Our World in Data against the following day, June 28th. And indeed, they do: 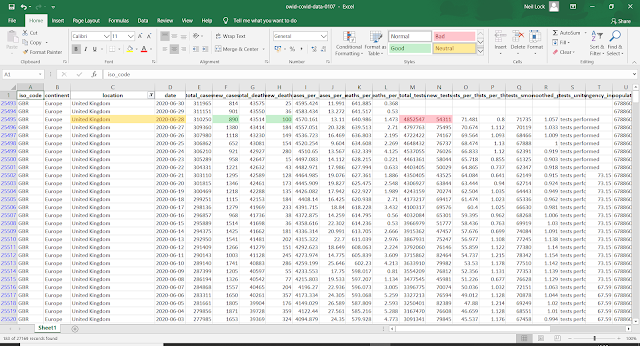 But what about those numbers of tests? 4,852,547 is the cumulative total recorded here, against the 9,067,577 stated in the Twitter feed. This means the total reported on the Twitter feed was 87% greater than – i.e. almost twice – the “official” figure which, if I understand right, must have been reported to the WHO. That’s an awful lot of missing test kits!

Is such a discrepancy normal? To answer that question, I compared the UK with other countries. I took the cumulative total numbers of tests per million population reported at Worldometers up to June 23rd, and compared these with the numbers reported at Our World in Data up to June 26th. I had no expectation that the numbers would match anywhere near exactly. Indeed, what I found is that the Worldometers numbers were consistently above the Our World in Data ones, in most cases by between 1% and 18%. This seems reasonable to me, given that testing is still ramping up in many countries, and the Worldometers count will probably include situations such as test kits sent out but not yet returned.

I then plotted the numbers of tests per million from the two data sources on a scatterplot: 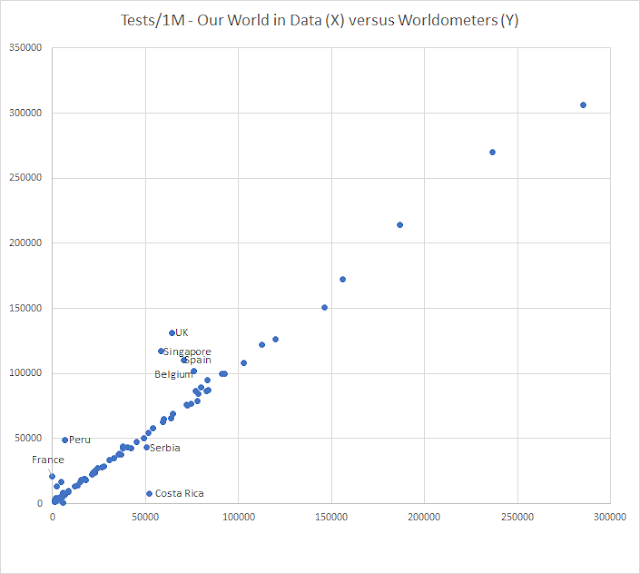 The plot thickens! The UK shows by far the biggest discrepancy in absolute terms among all the countries, and as a ratio it is only surpassed by Peru and France (and the French are not providing any meaningful data on tests at all). Of the three other “bad boys,” two, Belgium and Spain, are also among the countries hardest hit by the virus. Exactly the places, where you would expect there to be most political pressure to make the numbers look good!

Even the BBC seem to think all is not well on the subject of COVID testing in the UK: https://www.bbc.co.uk/news/health-51943612. It looks as if one problem is that antibody tests are being counted along with the swab tests, thus making the ratio of positives to tests lower than it ought to be. Also, they are counting test kits that have been sent out, many of which may never be returned. Moreover, the Chairman of the UK Statistics Authority, Sir David Norgrove, wrote to the government a month ago: https://www.statisticsauthority.gov.uk/correspondence/sir-david-norgrove-response-to-matt-hancock-regarding-the-governments-covid-19-testing-data/. He said, among much else: “The aim seems to be to show the largest possible number of tests, even at the expense of understanding.”

And one thing more. As I discovered while writing my article, the UK’s statistics collectors were recently required to move from their original basis of counting people tested to counting tests performed instead. This, obviously, resulted in increases in the headline numbers of tests right through the course of the epidemic. It also, unfortunately, meant that all the daily numbers of tests done in the UK prior to April 26th got wiped. And, while this move did bring the UK more into line with many other countries’ reporting procedures, countries such as Canada, Japan and the Netherlands are still reporting by people tested. So, my guess is that this move (likely both difficult and expensive), the over-reporting of test numbers, and the poor presentation of the data that Sir David criticizes, have all come about because of political pressure from those who want the numbers to look as good as possible. Sigh.

So, is the UK government misleading the public on COVID tests? Sir David Norgrove obviously thinks so; and I agree with him.

Posted by Neil No comments: