This is the seventh in a series of status reports on the COVID situation as at May 23rd, 2022. It covers Australasia and Oceania. This time round, the division of the reporting countries in the region into two groups is done on the basis of political status. The first group, Australasia and Oceania, contains the independent countries in the region. The second group, Oceania Dependencies, contains those reporting countries which are territories or dependencies of other countries.

Here’s the list of percentages of the populations fully vaccinated:

There is a wide spectrum, from vaccination levels comparable with Europe at the top, down to a proportion of only 2.9% in Papua New Guinea. For cultural reasons, people in PNG, so we’re told, are rather hesitant about taking vaccinations. Understandably so, in my opinion.

Here is the graph of lockdown stringencies over the course of the epidemic, and the current lockdown status: 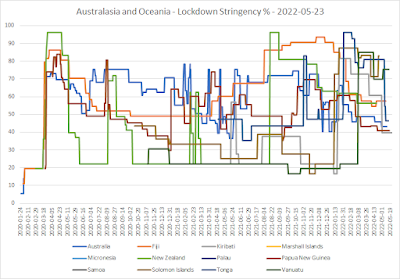 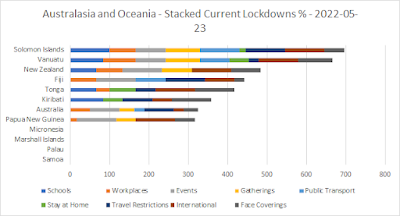 These countries are marked by generally high lockdowns, particularly since the middle of 2021. Sudden, large changes in stringency are also evident in some places, particularly in New Zealand.

There is no graph for the Oceania Dependencies group, as none of these countries are reporting stringency information.

Here is the ordered list of current stringencies, in terms of my “harshness” metric, which only includes mandates, and aims to assess lockdown levels in terms of their impact on the population:

Here are the current lockdown mandates for the eight countries which are reporting, from the lowest harshness upwards:

These are heavy lockdowns for this late stage of the epidemic! Particularly the last three. The New Zealanders really do need to open the borders and get unlocking, if they don’t want to lose contact with the rest of the world.

Here is the ordered list of cases per million:

There are definitely two sub-groups here. The top six have 20% to 32% of the population having been diagnosed as cases, comparable with much of Europe. The rest range from 11% in Tonga down to 0.5% in Papua New Guinea, with the Marshall Islands having had a total of 17 cases and Micronesia just 7.

Here is a map of cases per million:

The Cook Islands, the country with the highest cases per million in the region, is off the eastern edge of the map. Wallis and Futuna, Tonga, Samoa and French Polynesia are also off the east edge, Palau is off the north edge, and Kiribati is off both. 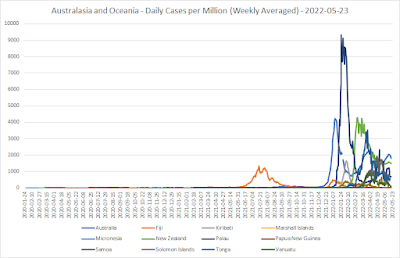 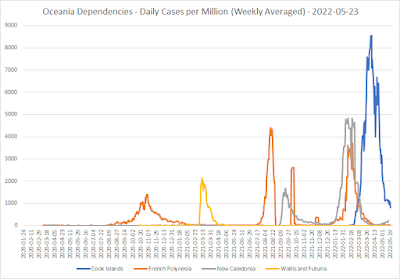 It’s clear that the epidemic is not yet over in this region, though the overall trend has been downwards since January. Australia and New Zealand, indeed, are at the top of the list of current daily cases per million. Being remote from the centre of a pandemic that, inevitably, will roll all the way around the world, has disadvantages in its later stages. Which raises the question, were those heavy lockdowns, maintained for so long, actually beneficial or not? 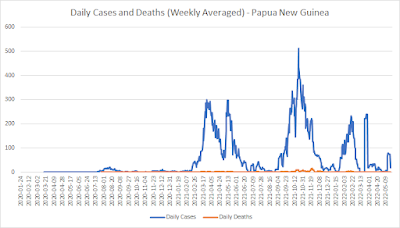 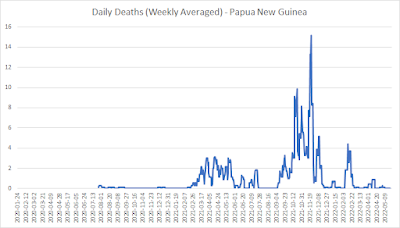 The epidemic here didn’t really get going until March 2021. To my eyes, there’s nothing wrong with the shape of the curves, so it looks as if they have been trying to collect their data as well as they can. And apart from the border closure, lockdown mandates are relatively light at the moment.

It will be interesting, as countries around pull out of the pandemic, to see whether the epidemic keeps on running in PNG or not, particularly as border restrictions are progressively relaxed. If it doesn’t, this will call into serious question the effectiveness of the vaccines.

Only Australia in this region is reporting hospital and intensive care unit occupancy data. Its hospital beds are 3% full with COVID patients, and its ICUs 5% full. No cause for concern.

The French territories of French Polynesia and New Caledonia have suffered more than the rest of the region. In the former case, the deaths per million figure is in the same league as some of the worse hit countries in Europe. The remainder are all in the bottom half by world standards.

Here’s the data on a map, normalizing the colours relative to New Caledonia rather than French Polynesia (which is off the map):

Deaths per million (darker is higher)

Which just goes to show that being a small island community gives no guarantee of success against the virus, at least compared to other places in the same region.

Next, here is the ordered list of deaths per case:

All these are relatively low, when compared with the badly hit countries in the Americas and Europe.

Here is the corresponding map:

This probably reflects that Australia and New Zealand’s health care systems are more effective than those of smaller countries.

Now let’s look at average excess mortality over the course of the epidemic. Four countries are reporting this metric in the region. Here’s the ordered list:

New Caledonia stopped reporting at the end of 2020, before the epidemic there had really got under way. And French Polynesia cut off its reporting in September 2021. Yet another country that pulls out when the going gets tough! But New Zealand, surprisingly, has kept average excess mortality below zero throughout the epidemic.

Lockdowns in this region have generally been high. And they are still high, in comparison to many other parts of the world. Despite this, the epidemic is by no means over yet in this region. Raising the question, were all those lockdowns really worth it? New Zealand in particular needs to open its borders and unlock, if it is not to lose contact with the rest of the world.

The course of the epidemic in Papua New Guinea in particular is still a concern. On the other hand, it should also provide a “lab test” of whether vaccinations have in reality been as effective as governments like to make them out to have been.