Here’s the list of percentages of the population fully vaccinated: 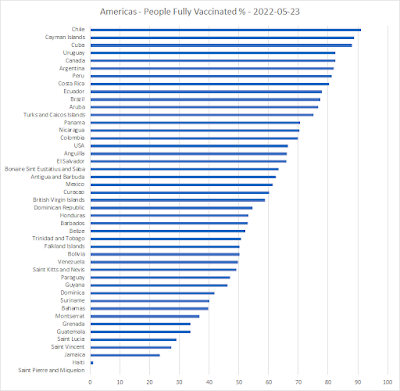 These values run the whole length of the spectrum. Many of the countries towards the bottom of the list are small island communities. Haiti has only 1.1% of its population fully vaccinated – and only 1.6% have had any vaccination at all. But generally, the richer countries tend to have higher vaccination percentages, if lower than Western Europe.

Here are the graphs of lockdown stringencies over the course of the epidemic, and the current lockdown status, in each of the four groups of countries: 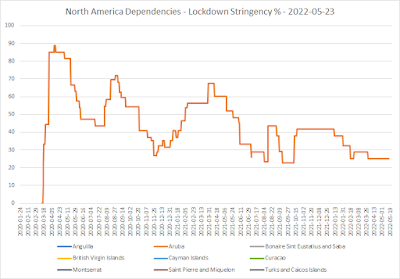 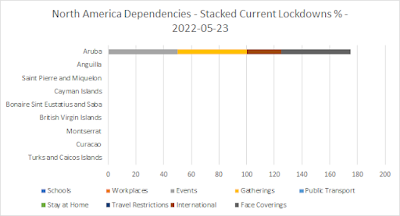 Aruba is the only country in this group which has been reporting stringency data. The process has been micro-managed, with no less than 64 changes in lockdown measures since the start of the epidemic. The current stringency is 25%. 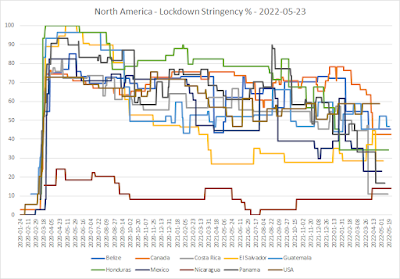 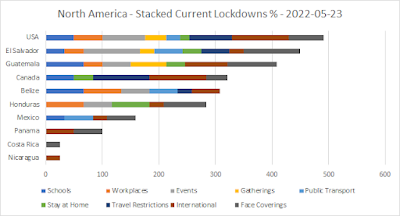 Now, there’s an outlier, if ever there was one. Nicaragua (brown line at bottom) has never been above 25% stringency in the whole epidemic! For most of the other countries, the trend has been much as in Europe, with a significant series of unlocks in the last few months. The ones to buck this trend have been the USA and Guatemala, with current stringencies of 59% and 47% respectively. It’s worth noting, though, that in a large country like the USA, where different states are using different measures, the overall stringency will often be overstated, since a harsh measure in just one state contributes not much less to the stringency than the same measure at national level. 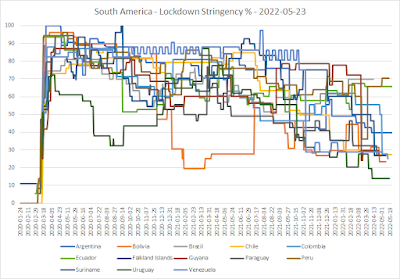 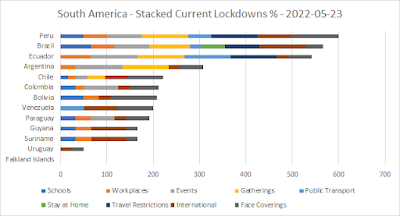 South America has been very heavily locked down for most of the epidemic, compared with Europe or even North America. Peru, Brazil and Ecuador still have very stringent lockdowns, all above 65%. Uruguay and Bolivia are the countries which have made the most efforts to unlock as far as possible. 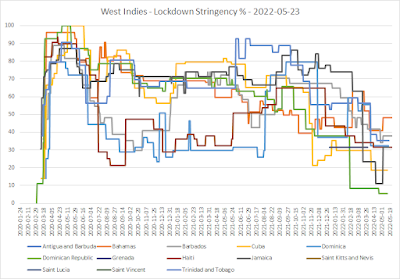 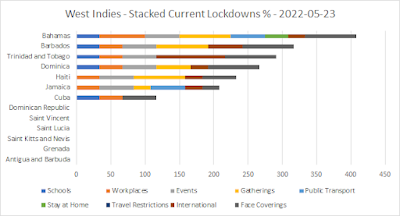 These countries, most of which are small communities separated by sea from each other, have tended to divide into a relatively high lockdown group and a relatively low lockdown one. But those who unlocked early have always had to lock down again later. This probably reflects that the peaks in different countries have tended to happen at different times.

Here is the ordered list of current stringencies, in terms of my “harshness” metric, which only includes mandates, and aims to assess lockdown levels in terms of their impact on the population: 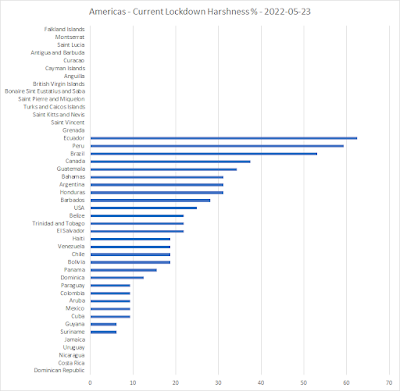 While Jamaica’s stringency is 31%, there are very few mandates among their current measures, and no particularly harsh ones. They are: Gatherings: Up to >1000, International: Screening. Uruguay and Costa Rica have no restrictions at all apart from Face covering: Recommended. Nicaragua has only International: Screening. And the Dominican Republic is fully open for business, without any lockdown measures at all.

At the other end of the scale, here are the lockdown mandates for the top four:

As with the USA, Brazil and Canada harshness figures may overstate the actual harshness of regional measures. But Ecuador and Peru are still under unsustainable levels of lockdown.

Here is the ordered list of cases per million: 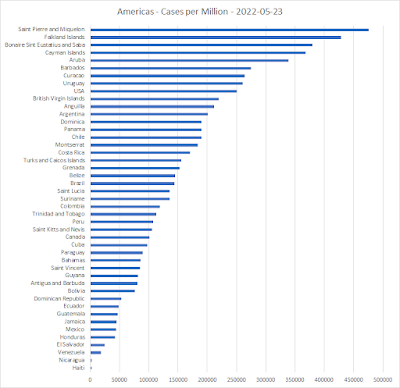 All the highest scorers in cases per million here are small island communities. Uruguay is the highest among sizeable countries, with 26% of the population diagnosed as cases. The USA has 25%. The cases per million here tend to be lower than Western European levels; and sometimes considerably lower. Towards the bottom, El Salvador shows just 2.5% of the population having had COVID, Venezuela 1.8%, and Nicaragua and Haiti both less than 0.3%.

This tends to suggest that countries with better connections to the rest of the world tend to find more cases per million than those with less good connections.

Here, it is the more temperate countries which tend to find the more cases per million. These being small communities, the figures tend to be volatile. They often show multiple peaks within one country, sometimes separated by a few months. Of the last three major peaks, the first two were in Saint Pierre and Miquelon (dark brown), and the latest in Montserrat (dark blue). The two peaks in Saint Pierre and Miquelon suggest that the virus first broke out in one part of the country, was briefly contained, then began again in another part. It’s hard to know from these figures how far these small places are from herd immunity. But I tend to feel optimistic.

To the North American mainland: 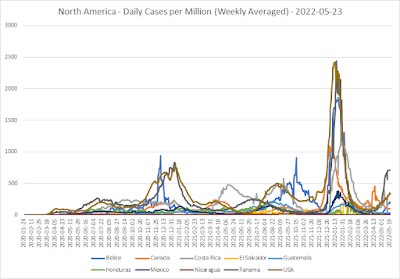 The big peaks around the new year in the USA (dark brown), Panama (black), Belize (mid blue) and Canada (light brown), were caused by the arrival of the omicron variant. The recent rise in cases in the USA, and the rise in Canada in late March to April, seem to have been caused mainly by the BA.2 variant. It seems reasonable to suppose that in the other countries which are now trending up, Panama and Belize, the cause may be the same.

Canada got over the cases hump, but they had a very stringent lockdown at the time. Costa Rica has also had a recent small peak in cases, which began not long after they unlocked in early April. It’s unclear which way this is headed right now.

In Nicaragua, the numbers of cases are an order of magnitude lower than you would expect, compared with its neighbours. When I first saw the Nicaraguan figures, I didn’t believe them at all; I thought they might have been faked. But now, I see that it’s possible they have been genuinely trying to count the cases, but have simply been missing most of them. The graph of new cases does show peaks in May 2020 and August 2021, about a month after the peaks of the February 2020 variant and the delta variant, respectively, in Europe. 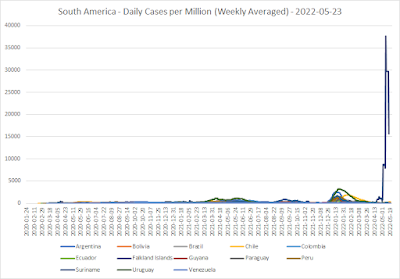 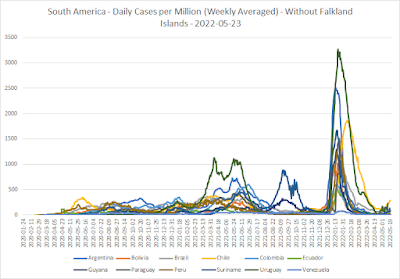 The countries with significantly rising cases in South America now are Chile, Uruguay and Suriname. Again, might this be the fingerprint of BA.2? Venezuela has very low cases per million, but its cases profile over time is actually quite believable: 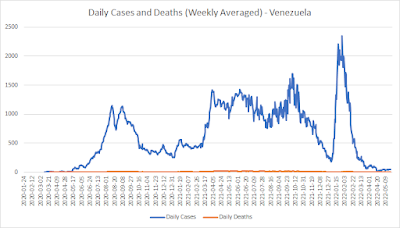 The peaks in new cases in Venezuela are about where you would expect them to be, a month or so behind European or US peaks. There is good evidence that omicron has been there, but not yet any evidence of BA.2. Unless the small rise at the end of March is that evidence?

On to the West Indies: 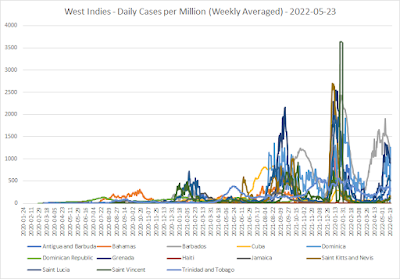 The West Indies exhibit much the same case behaviour as the North American dependencies. Similarly, it is not easy to determine exactly where these countries stand. However, one country of interest is Haiti, with its extremely small cases per million. Here’s the Haitian cases profile: 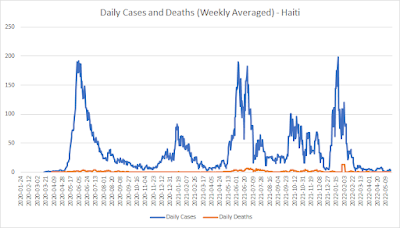 As in Venezuela, the peaks in new cases in Haiti are about where you would expect them to be. There is evidence that omicron has been there, but no evidence as yet of BA.2.

Unlike in Europe, the reporting of hospital and ICU occupancy in this region is very patchy. Indeed, only the USA, Canada and Bolivia are reporting hospital occupancy; and these countries, with the addition of Argentina and Chile, are the only ones reporting ICU occupancy. In both cases, the currently worst affected country is Canada, with about 5% of hospital beds and 7% of ICU beds occupied by COVID patients. 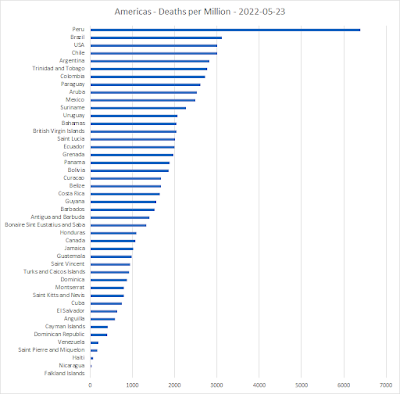 Peru is the worst in the world in deaths per million. The USA’s position in third place in the Americas is unexpected for such an economically and technically competent country; particularly since Canada is a long way behind. Could this be, in part at least, a “latitude effect,” as in Eastern Europe?

At the very bottom, the countries divide into two. The Cayman Islands, Saint Pierre and Miquelon, and the Falkland Islands managed to keep the virus out until the less lethal omicron variant arrived. The same is true, to a lesser extent, in the Dominican Republic; and in Cuba, which kept the virus at bay prior to the delta variant. On the other hand, Venezuela, Haiti and Nicaragua all have both low deaths per million and low cases per million, suggesting their problems may be more administrative.

Here is the same data, shown on maps of mainland North and South America:

Peru is the black spot here. Note that if I had coloured the North American map using the Peru deaths per million as the darkest possible colour, the USA would have been the same colour as Brazil and Chile, and the other North and Central American countries would have been lighter still.

Next, here is the ordered list of deaths per case: 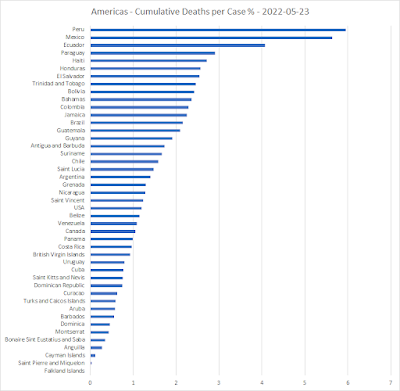 Here are the corresponding maps:

This shows the economically and technically stronger countries, with the dubious addition of Nicaragua, as having less deaths per case than the others.

Uruguay, Argentina and dubiously Venezuela look to be the best performers in mainland South America. And Peru and Ecuador are the worst, in that order.

Now let’s look at average excess mortality over the course of the epidemic. Here’s the ordered list: 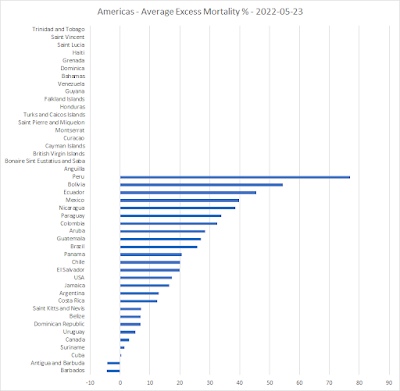 Most of the larger countries are providing excess mortality figures; those which do not are mainly small islands. Haiti and Venezuela, unfortunately, have not provided excess mortality figures. Nicaragua has supplied these figures, but again unfortunately, they ceased at the end of 2020. I therefore cannot cross-check them against the COVID deaths statistics as well as I would like. But at least they can give an indication.

22 out of 50 European countries have kept average excess mortality throughout the epidemic below 10%. In the Americas, there are only nine such, three of which are small countries. And Cuba, Suriname and Belize stopped reporting at the end of 2020. Only Canada, Uruguay and the Dominican Republic continued reporting into late 2021, and only Uruguay has reported in 2022.

Here are the maps:

Ouch! Mexico is the worst, by a long way; worse even than Nicaragua. (And if Nicaragua had continued reporting excess mortality, it would probably now be lower than shown).

Why things have been so excruciatingly bad in north-western South America, I can’t be sure. Poor health care has been cited as the main reason in Peru. In Bolivia, there have been corruption scandals. In Ecuador, it is said to have been due to lack of preparedness in the early stages of the epidemic; but there have also been many deaths since.

In the Americas, the larger countries, and the ones better connected to the outside world, are mostly now seeing the epidemic winding down, as it has in Europe. In the smaller countries, it is harder to tell. But those countries, which managed to keep COVID at bay until the less lethal omicron variant arrived, have done well in terms of deaths per million.

South America has been particularly bad for COVID deaths, even compared with Europe. Peru, Brazil and Ecuador have been the worst. Of the South American mainland countries, Uruguay seems to have done best overall against the virus.