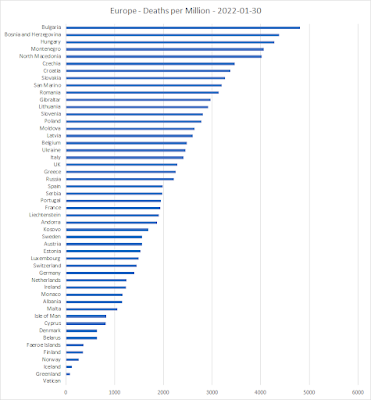 Today, I’m going look at the status of COVID-19 in Europe as a whole. The data I use was taken on January 31st, and runs up to January 30th. There will be no spaghetti graphs in this particular missive. Instead, I will be concentrating on two aspects; the overall performance of each country over the course of the epidemic so far, and the current status in each country.

Since I last looked at COVID in Europe as a whole, statistics for four dependent territories which were initially reporting, but whose figures were removed from the Our World in Data feed in late November 2020, have been restored to that feed. They are: the Faeroe Islands, Greenland, the Isle of Man and Gibraltar. These places are interesting, because they represent some of the most extreme COVID conditions in all of Europe.

Performance over the whole epidemic

I’ll start at the opposite end from usual, with cumulative deaths per million – one of the COVID metrics on which, I expect, the politicians will eventually be judged. There is a very strong representation of Nordic countries at the bottom of the list. Of the seven such countries and dependencies (Sweden, Denmark, Faeroe Islands, Finland, Norway, Iceland, Greenland) only Sweden is not in the bottom 10 out of 50 countries reporting. The top of the list, on the other hand, shows a high concentration of countries from eastern Europe, and particularly from the south-eastern part of Europe.

Let’s look at another metric which should be closely related to deaths per million, the average excess mortality over the whole course of the epidemic: 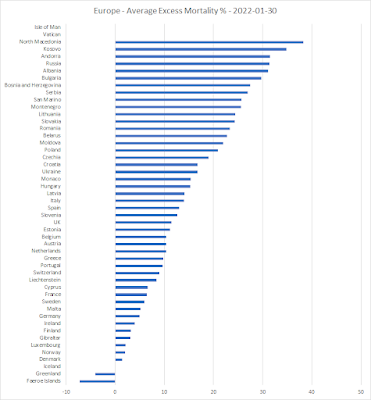 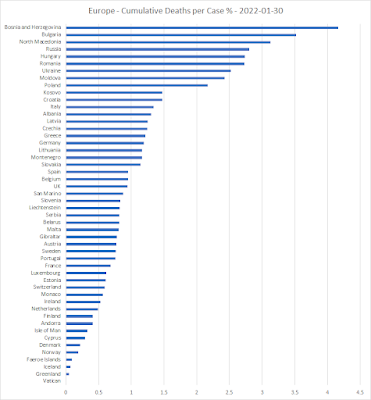 That’s interesting. The Nordic countries, except for Sweden, all come out in the bottom ten in this list too. The Isle of Man is down there as well, having done far better on this metric than the UK as a whole; perhaps because they were allowed to close their island borders?

But the leaders are often the same countries that lead in the deaths per million. This might be down either to generally poor health care systems, or to failure (perhaps due to a shortage of test kits) to identify a significant proportion of the actual cases. Russia is up there, too.

Let’s look at the cases per million over the whole epidemic: 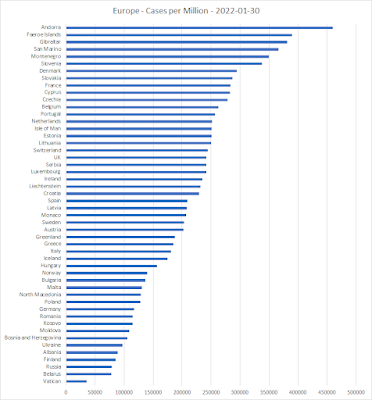 Small countries seem to gravitate towards the top here; not really surprising, as the virus is likely to spread quicker in a close-knit community. More than 45% of the population of Andorra have been diagnosed as COVID cases! But the small countries high in cases per million include both places which have done well against the virus like the Faeroe Islands, and those which have a high death rate like Gibraltar and San Marino.

Two of the lowest cases per million, on the other hand, are found in more remote and less densely populated countries: Russia and Belarus.

Which countries have been doing the most testing? Here’s the list: 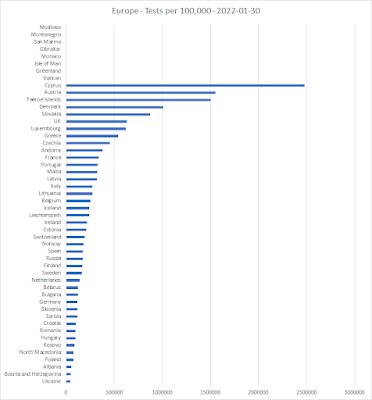 The Faeroe Islands and Denmark are right up there. The top four have all averaged 10 or more tests per head of population. Cyprus, though it is about as far away from being Nordic as you can get and still be in Europe, is in the bottom 10 in both deaths per million and cumulative deaths per case. Suggesting that ready availability of test kits is a big factor in minimizing deaths due to the virus. Austria is the one in which the large amount of testing does not seem to have had a correspondingly large effect on the death rates. Perhaps because of its central location in Europe?

At the other end of the table, countries with high deaths per million tend to have low tests per population; and Montenegro, in particular, is not reporting testing data at all.

Here is the list of cumulative cases per test – a high value, I would expect, signifies persistent shortages of test kits: 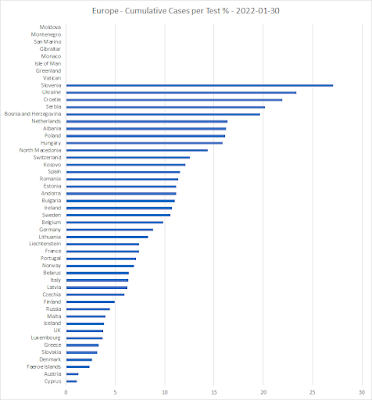 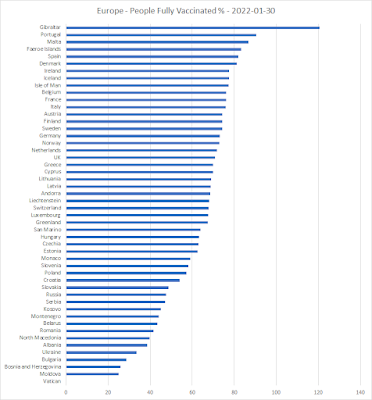 That Gibraltar figure has to be an error – I think they must be including booster shots in the count of full vaccinations, whereas they should be counting fully vaccinated people.

But it’s clear that the concentration of eastern and south-eastern European countries near the bottom of this list matches similar concentrations near the top of the lists of deaths per million and deaths per case. From Hungary downwards, almost all the countries with the lowest vaccination rates are in eastern Europe. A break-point seems to come at about 60% of the population fully vaccinated. This suggests that the vaccines do help to lower deaths per case; but it says nothing about how well, if at all, they limit the transmission of the virus. 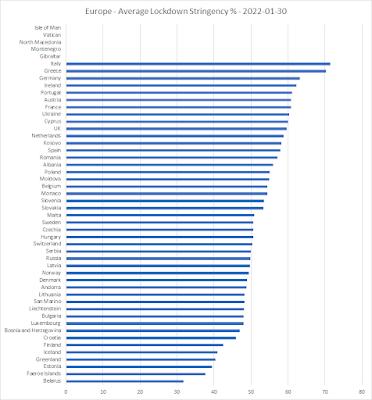 The Nordic countries (except for Sweden, and with the addition of Estonia, which is culturally quite similar to the Nordics) are conspicuous by their relatively low average lockdown levels. And the three heaviest locked down countries on average (Italy, Greece, Germany) also have high deaths per case, compared with other countries in their geographical neighbourhood. This is not good news for those that have pushed for heavy and continued lockdowns as a means of controlling the epidemic! Whatever it is that the Nordics have going for them – culture? cold? strong constitutions? islands with easily closed borders? being close-knit communities? having few big cities? – they seem to have got things right.

Cyprus has achieved low death rates with high lockdowns, but they seem to be an exception. I suspect it is the testing, rather than the lockdowns, which gave them this advantage.

Since face covering mandates are not included in the Blavatnik stringency calculation, I’ll show also the list of average stringencies for this particular type of lockdown: 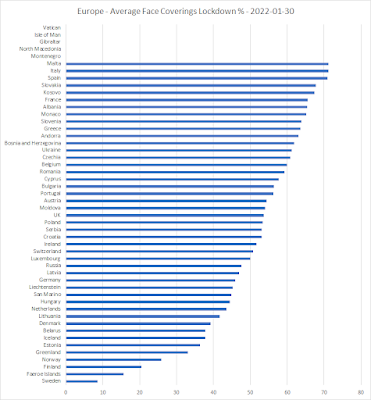 Again, the Nordic countries are at or near the bottom in the league of face mask mandates. At the other end of the table, the Maltese have done generally well in keeping deaths down, though their cases per million are quite low. So, they may still have a way to go to reach herd immunity. But some countries that have done badly against the virus, like Italy and Slovakia, have had high levels of face mask mandates. I don’t detect any correlation.

Here is the league table of time spent under full lockdowns: 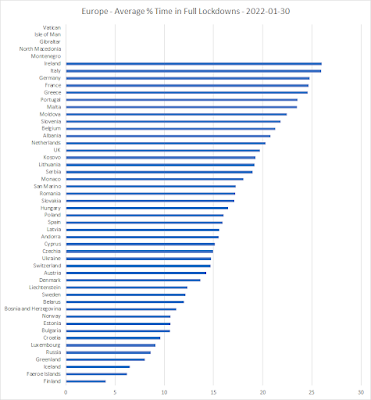 Hmmm… Religion, particularly the Catholic one, seems to encourage totalitarianism in lockdowns. The UK is an exception, being one of the least religious countries in Europe. But it has been seized by the religion of “safety at any cost,” and the technocracy that goes with it. Meanwhile, at the other end of the table are those countries, whose governments show more respect for the people they are supposed to serve. Oh, and Russia too; but that may simply be due to its huge size.

Here are the details of each country’s performance, in text form:

So, how are all these countries doing right now? Here are the current daily cases per million: 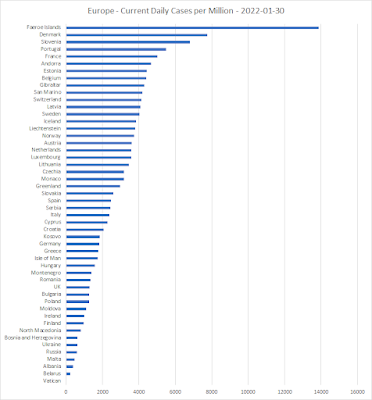 The Faeroes and Denmark seem to be using the opportunity provided by the omicron variant to “go for broke” in pursuit of herd immunity. Slovenia, Portugal and France head the chasing pack.

To see who has crested the omicron wave (or has not yet started on it), and who has not, here are the current week-on-week case growth percentages: 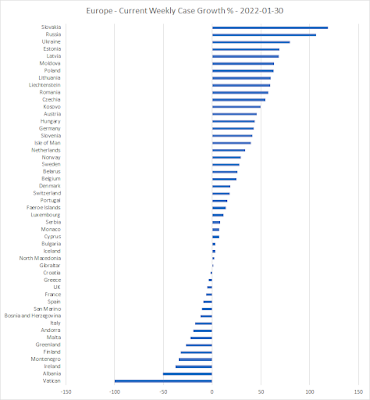 Some of the countries lower in the current daily cases table, notably the UK and Ireland, look as if they have already crested the omicron wave. In south-eastern Europe, Serbia, Montenegro and Bulgaria look to have crested too. Some other countries, such as Belarus, look to be yet to be hit by it. 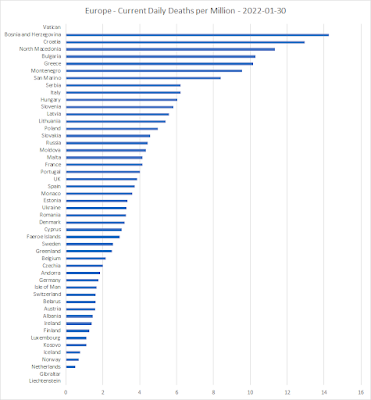 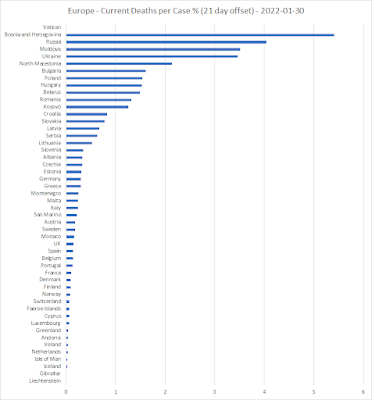 Ouch! Things are not good at all on the COVID front in Eastern Europe. And in Western Europe, the worst hit countries at the moment, from the point of view of deaths per case, are Germany, Greece, Malta and Italy. The three most heavily locked down countries in Europe over the whole epidemic, and the one which has locked down hardest on face mask mandates! I’m tempted to say, Oops. By failing to “let omicron rip,” they have extended the lifespan of the more lethal delta variant. Over-caution costs lives.

Here are the lists of percentages of hospital and ICU beds filled by COVID patients: 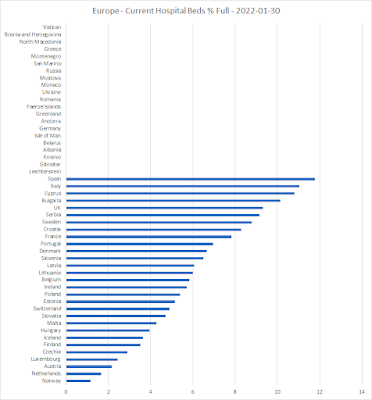 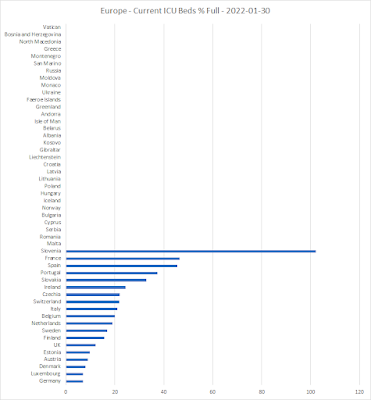 No-one looks to be in any trouble as far as hospital beds are concerned, at least not by comparison with the wave of a year ago. For ICUs, the Slovenians do face a big shortage; which they may possibly be able to alleviate by sending patients to neighbour Austria, just as the Dutch sent patients to Germany early in the epidemic. France, Spain, Portugal and Slovakia are the other four which seem to have the most worries on ICU capacity.

And to complete the review, here are the current lockdown stringencies: 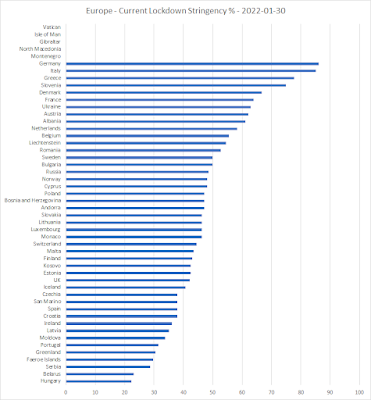 As usual, Germany, Italy and Greece are right up there; and for ICU reasons, Slovenia is too. The French also have ICU reasons for staying locked down, though both the Spanish and Portuguese have lowered their stringencies recently.

A few tentative conclusions, some of which are more obvious than others.

1.     The Nordic countries have done well against the virus. Except for Sweden, they have done excellently. Luxembourg has done as well as anyone else, and the Isle of Man has also done well.

2.     Ready availability of test kits seems to be a big factor in minimizing deaths.

3.     Vaccination, above about 60% of the population, seems to help lower deaths per case. But the effect of vaccinations on transmission of the virus is not clear.

4.     At this stage, the countries with the highest lockdowns over the course of the epidemic so far are generally doing badly against the virus. It remains to be seen how long this will continue.

5.     There is no clear evidence of face mask mandates lowering death rates.

6.     The COVID situation looks promising in most countries in Western Europe. But not yet in Eastern Europe; and particularly not in Belarus and Russia.