This is the sixth and last of my “omnibus” reports on the statistics of the COVID virus. I had left unexplored just one tiny (in population terms) but large (in geographical extent) corner of the world; Australasia and the islands in the Pacific Ocean. There are just nine countries in the group, and they are listed in the figure above. Some of these countries have had very small numbers of cases. The Solomon Islands have had 20 cases in total, and no deaths. The Marshall Islands, four cases and no deaths. Vanuatu, four cases and one death. Samoa, just three cases. And Micronesia, just one single case.

I have added to my graphs spaghetti graphs and lists covering the levels of contact tracing, testing and vaccinations which are available in each country. These are taken from the Blavatnik School of Government feed, similarly to the detailed lockdown data. In order to reduce the number of figures required, I have also re-worked my lockdown graphs to show all nine of the different lockdowns on a single graph, as above.

I am also taking advantage of these new graphs to do some comparisons between this group of countries and the core group of 14 European countries, which I used a month or so ago for analyzing lockdowns at the detailed level.

Once again, the data sources are (for epidemic data) Our World in Data and (for lockdown regulations) the Blavatnik School of Government, both at Oxford University. The data I used included figures up to and including May 2nd.

Here are the bar charts of the United Nations HDI (Human Development Index) ratings for the nine countries:

And here are the Freedom House ratings. These are generally a lot higher than in Asia or Africa!

For Australasia and Oceania, I’ll start with the total cases per million spaghetti graph and list, and compare them directly with the corresponding graphs for the 14 European countries: 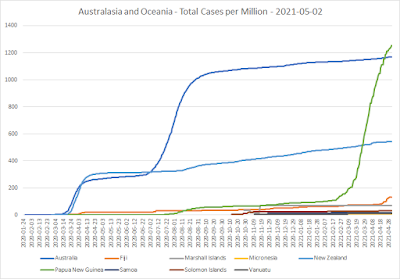 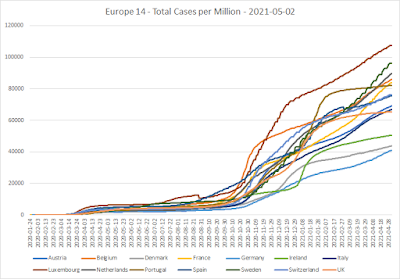 All the cases per million in Australasia and Oceania are lower than those in Europe by several orders of magnitude – even in Papua New Guinea (PNG), where the recent outbreak must have been a bit of a nasty shock. The reasons behind the far better performance in controlling cases will not be hard to find, when we come to look at lockdowns. But for now, I’ll take a look at the contact tracing data. Here’s the definition of the levels of availability of contact tracing from the Blavatnik codebook:

Here’s the spaghetti graph and list of these levels over time:

Notice that Vanuatu and Papua New Guinea, having previously said their contact tracing systems were Comprehensive, had to withdraw that claim and return the status to Limited; twice in the case of PNG.

Here are the corresponding European graphs for comparison:

Notice that at least four countries (the UK, Sweden, Germany and France) had to do the same as Vanuatu and PNG, and withdraw their claims to having a comprehensive contact tracing system. Though to give the Swedes credit, they realized their system wasn’t up to scratch, and withdrew their claim about it, way back in March 2020.

The UK is the only one of the four to have made the claim twice, and subsequently withdrawn it both times. Baroness Cock-up (Dido Harding) strikes again. See here: https://www.itv.com/news/2021-03-10/covid-seven-damning-criticisms-of-dido-hardings-nhs-test-and-trace-programme.

Here are the daily cases per million over the course of the epidemic in Australasia and Oceania: 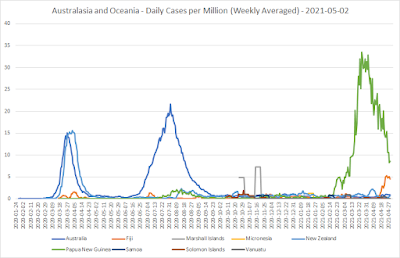 Aha, I’ve seen bell curves like those before! They represent sudden, isolated outbreaks of cases, equally suddenly (or slightly less so, in the case of Papua New Guinea) snuffed out. 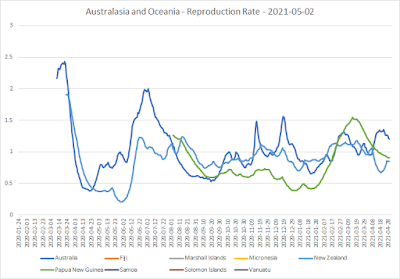 Only Australia, New Zealand and (since August) Papua New Guinea are keeping track of the R-rates. The Australian R-rate looks particularly peaky and irregular – characteristic of small-scale outbreaks inside a relatively large country. 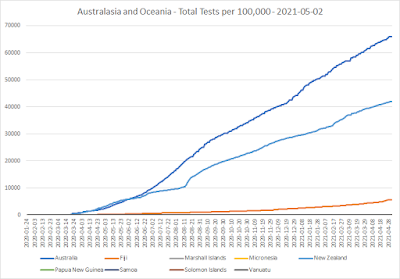 For comparison, here’s the European graph: 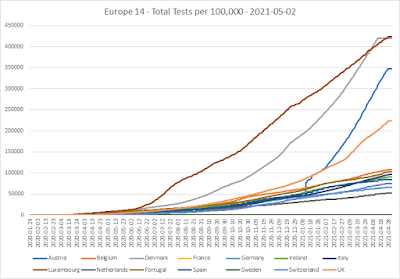 Only Australia has done as much testing as the very lowest placed European country which is reporting tests (the Netherlands).

Here are the data on the level of testing which is available in each country. First, the Blavatnik codebook definition:

Next, the spaghetti graph and list for Australasia and Oceania: 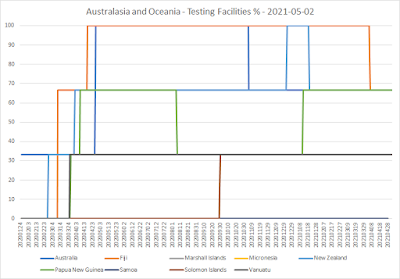 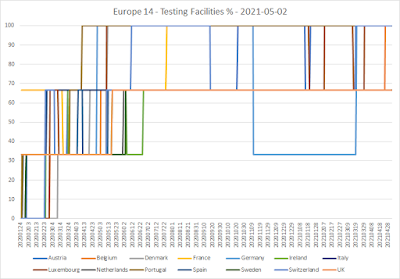 No country in Australia and Oceania is offering testing to people without actual symptoms that might suggest COVID. About half of the European countries are offering such testing to the general public; but the rest, including the UK, are not.

Here are the lockdown stringencies over time for Australia and Oceania: 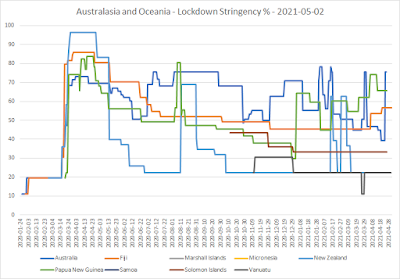 Surprisingly high in the latter half of the epidemic, considering the low numbers of cases. And there seems to be a lot of micro-management going on in Australia and New Zealand, if not also in Papua New Guinea and a bit in Fiji. Here, for comparison, is the European graph: 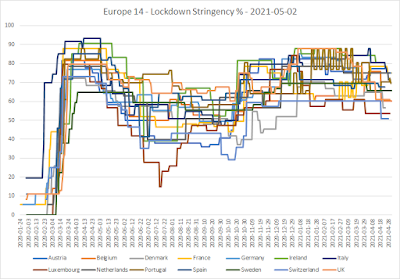 Now for the new graphs. These graphs plot the nine individual stringency measurements (each of which is a percentage) as different coloured segments in the same bar. The maximum possible length of the bar is 900 units.

There are three variants of the graph. The first shows the average level of each type of lockdown over the course of the epidemic. The second shows the current levels. The third shows, for each type of lockdown, the proportion of days for which the country has been fully locked down in that way. I’ll show these graphs for the European countries, as well as for Australasia and Oceania. 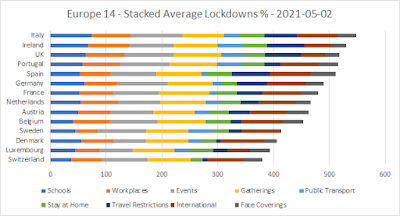 What shows up here (the brown bar second from the left) is that only Fiji and Papua New Guinea, and to a lesser extent Australia, have restricted workplace opening anything like as strictly and as long as the European countries. And even in these three countries, events and gatherings have been far less restricted than in Europe. Fiji has had quite a bit of stay-at-home but not many larger scale travel restrictions, while Australia has been the other way round. And New Zealand, the Solomon Islands and Vanuatu have locked down far less strongly than the others, in all respects but one; and that is the international travel lockdown (dark red bar, second from the right). 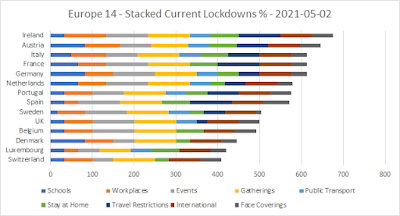 New Zealand and Vanuatu are now free of all restrictions other than on international travel, apart from a regional face covering mandate in New Zealand. And only Papua New Guinea and Fiji are locked down with anything like the stringency of the European countries. Well, ladies and gentlemen, there you have it. Australia, New Zealand and Vanuatu have, for the most part, simply closed their borders hard, and done not very much else on the lockdown front. Look at those huge red bars, meaning “borders closed!” In Europe, er… not so much. Indeed, only Belgium, Germany, Spain and Denmark have closed their borders at any point. There’s a case to be made that the EU project, by making governments more reluctant to close borders if an emergency so dictates, may have contributed significantly to the death toll.

I can only surmise that, when MI5½ (or whatever their name is) passed Boris Johnson a coded message at the start of the epidemic saying CYB (Close Your Borders), he must have thought he was playing “Chinese whispers,” and heard it as CYA (Cover Your Ass). We’ve been suffering unnecessarily ever since.

Here are the deaths per million graphs and lists for Australasia and Oceania: 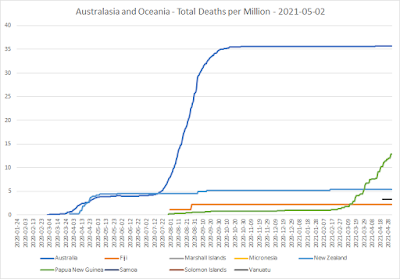 You can see how these countries, with the recent exception of Papua New Guinea, have managed to get their outbreaks under control, or very nearly so, inside just a few weeks. In Europe, though, the situation is rather different: 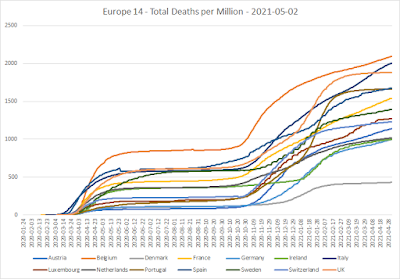 But even here, there is a divide between the countries which seem to have managed to get the second wave under control or all but, and those that haven’t. The former include Denmark (grey), Portugal (fast rising brown) and the UK (pink). The latter include Italy, Spain and France. In fact, the Belgian, Italian and French lines just seem to be carrying on upwards at about the same speeds. That’s not good – particularly because it suggests the vaccine isn’t having much if any effect yet in those countries.

Compared with other places, there’s not much vaccination activity going on in Australasia and Oceania. In fact, only New Zealand has done any full vaccinations yet, and then only 1.2% of the population. Here’s the graph of people vaccinated with one or two jabs:

And here is the current vaccination status for each of the countries:

(I don’t make use of the H7_Flag indicator).

In contrast to the European equivalents: 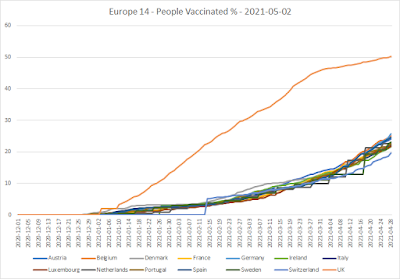 It looks as if Kate Bingham, the architect of the UK vaccination program, has done as well as Dido Harding has done badly!

What is the most important single thing for a government to do in the very early stages of an epidemic like this? The answer is now blatantly obvious. CYB. CLOSE YOUR BORDERS! The Aussies and New Zealanders (and Vanuatuans) did it – and promptly. As a result, thus far they have got off orders of magnitude more lightly than most of the rest of the world, except for China and its neighbours.

But they still have a way to go. They will need to vaccinate far more of the population to get to herd immunity than in other places, and it’s going to be difficult if they can’t open up when the rest of the world starts doing so. But for the longer term, I think they’re in way better shape than most.

Thoroughly agree with your assessment. The most important action is to close borders, test and quarantine. If you stop it coming in you can control it.
I think it is a lesson a lot of countries learnt from SARS and MERS. The countries that were quick to take note and shut borders have done much better.
We still do not seem to have learnt the lesson and had thousands of Indians flying in without checks.
This is why we are among the worst in the world and not the best.

An excellent bit of research as usual Neil. How about you turn your attention on the evidence for global warming?

Opher, I already did an article on the science of global warming (this was in the days of WriterBeat, but it's still on my blog):

I also did one on the economics of climate change, this one got published at WUWT: