(No, your eyes do not deceive you. Those figures above 100% are just as real as any other government statistics!)

This is the third monthly update to my end of October report on the COVID-19 situation in 14 Western European countries. Again, the main data sources are the same as before: Our World in Data and the Blavatnik School of Government, both at Oxford University. The data I used was taken on February 3rd, and it included figures up to and including February 2nd.

This month, I have updated my “magic spreadsheets” to show also data on numbers of COVID patients in hospital and in intensive care, and numbers of vaccinations. I have also noticed that one particular country, Denmark, seems to have been quietly establishing itself as probably the most successful against the virus among all these countries. It seems that, unlike in Hamlet’s day, something is not rotten in the state of Denmark! So, I will be putting a special focus on Denmark in what follows.

I’m going to be calculating, among other things, percentage occupancy rates of hospital beds and intensive care unit (ICU) beds with COVID patients. So, I thought I would start by showing the numbers of hospital and intensive care beds per million population for each country. A figure of hospital beds per 1,000 population is included in the Our World in Data feed. However, it has not been updated since the beginning of the epidemic. Looking at the Wikipedia article https://en.wikipedia.org/wiki/List_of_countries_by_hospital_beds, I see that the numbers from Our World in Data broadly match the 2017 figures shown there, although some may be older. For ICU beds, I have simply used the numbers from the Wikipedia article.

Here are the numbers of hospital beds per million population:

That shows up something weird. The further away a country is from the geographical centre of Western Europe, the less hospital beds it tends to have relative to population! What might have caused that? Strong Northern constitutions? Healthy Mediterranean climate? Or a history of relative poverty in the south? I don’t know. But I will note that Denmark comes second to last in this classification.

Here are the numbers of ICU beds. The data is from 2018 or earlier; so, it excludes any emergency ICUs, which have been created as a result of the COVID epidemic.

Once again, here’s the spaghetti graph of new cases per million in each country: 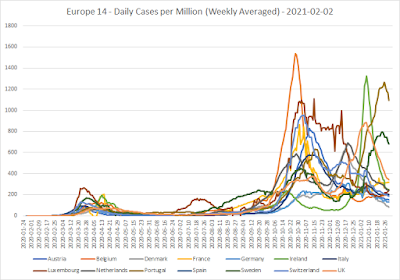 The spaghetti doesn’t look very appetizing, does it? But what is noticeable is that, since July, there has almost always been one country with a significantly higher new cases per million count than all the rest. In July, it was Luxembourg (which, being the smallest country, will always tend to show more volatility in cases per million than the others). In August and September, it was Sweden. In October, Belgium’s new cases per million count went to an unprecedented peak. Then Luxembourg took over again, until the middle of December. Briefly, the Netherlands was at the top, until overtaken by the UK close to Christmas Day. Then Ireland, having been at the very bottom of the graph through November and much of December, soared to the top, with a peak almost as high as Belgium’s. Most recently, it is Portugal whose cases have risen to a high peak. Here’s the histogram of current (last reported) cases per million per day. Guess who’s at the bottom?

One deduction I make from all this is that virus hot spots tend to move around Europe, seemingly at their own pace. Another is that the Irish lockdown, which started in October – earlier than anyone else’s – even if it solved the immediate problem, still left a huge pool of infectables, who then became infected all together around the New Year.

The movement of the hottest spots from country to country is shown even more clearly by the graph of weekly case growth from the start of the epidemic: 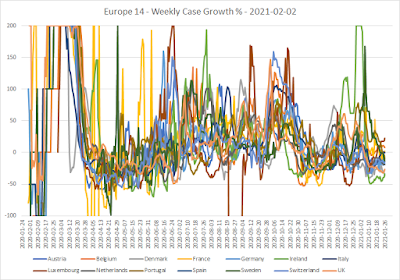 Now for some new graphs. Here are the numbers of COVID patients occupying hospital beds, per million of population: 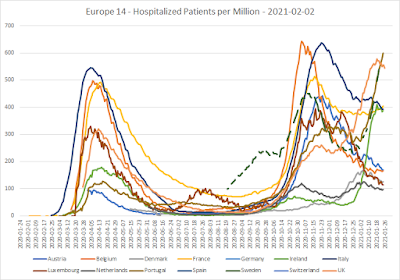 You can see the differences between the first and second waves here. Although in most countries the cases are way higher in the second wave, hospitalizations are only slightly higher. The Spanish figures (dotted line; because they don’t report at week-ends) suggest to me that they got the second wave even before Belgium did. Switzerland and Germany, unfortunately, are not reporting hospitalization figures. Oh, and look at those Danes (grey line). They’ve been bumbling along at or near the bottom, ever since they started reporting hospitalizations back in May.

Re-casting the latest figures as percentages of the total hospital beds available, the order looks like this:

20% to 25% of available beds taken up by COVID patients is surely a major slice of all hospital beds in a country. But it doesn’t look, to me, to be a show-stopper. Yet, at least.

Now, let’s look at the ICU patient counts and percentages: 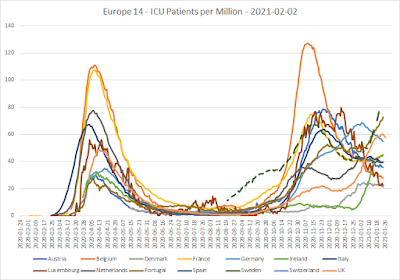 What’s this? Portugal at 173% of ICU beds occupied? Sweden at 132%? Big trouble – even though they surely must have done some emergency building of new or temporary intensive care units. UK at 88%? Spain 79%? Ireland 69%? Aha, it looks as if this is where the blockage is.

Meanwhile, the Danes are sitting pretty, relatively speaking, at 32%.

Here are the figures for deaths: 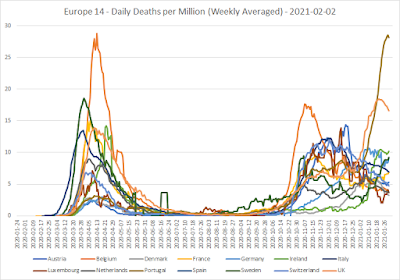 That’s Belgium with the first two big peaks. Of the recent disaster zones, the bigger peak is Portugal, and the smaller but wider peak is the UK. Meanwhile, where are the Danes?

If you look at the figures in terms of total deaths per case over the course of the epidemic, they look like this:

One interesting question is: Is the new strain of the virus, as has been claimed by some, more deadly than the original one? Here is the graph of deaths per case, offset by 21 days, since late May: 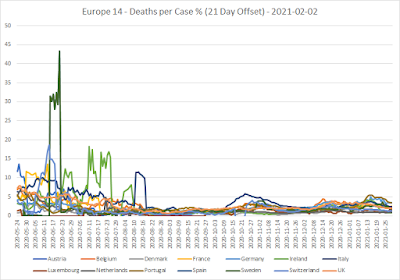 The peaks in the left part of the graph are unreliable, due to reporting issues at that stage of the epidemic. But the general trend until October is downwards, from a (much) higher percentage in March and April. If the new strain is more lethal, then I think it must have appeared first in Italy at the beginning of October (21 days before the peak). The peaks further to the right suggest that, when the new strain first hits a country, it is more lethal than the older one, which by that time will have declined far from its original virulence. But after that, its deadliness tends to decrease with time; just as happened with the first strain.

So, to the latest European political football: COVID vaccinations. These are reported in three ways: total vaccinations, people vaccinated (one or two jabs) and people fully vaccinated (two jabs). I’ll show only the last two of these, measured as percentages of the population: 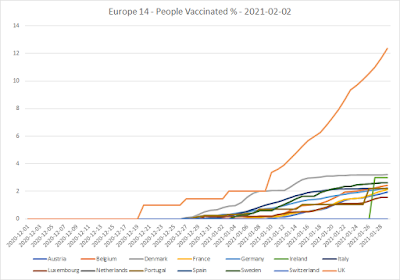 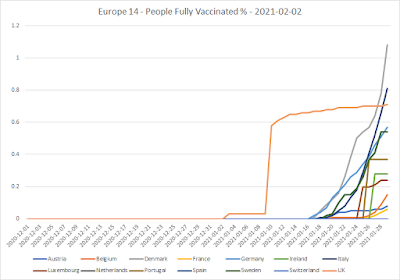 Guess who’s at the top on that second graph? Yes, Denmark. Followed by Italy, the UK and Germany. There’s a divide between two strategies here. The UK is trying to get the first jab out as widely as possible, whereas Denmark, Italy and Germany are trying to get as many people as possible fully vaccinated. I’d have gone with the second strategy, on the grounds that the most vulnerable people are very much more vulnerable than any of the other groups, so deal with them first. But then, I’m not a politician. It will be interesting to see what – if any – changes result in the virus reproduction rates in different countries as the vaccine roll-out proceeds. My guess is that we probably won’t be able to see much effect until March.

How has Denmark done so well?

So, what have the Danes done right? Is it the strong Viking constitutions? Some secret ingredient in their pastries? Or is it possible that the Danish government, or the set-up of their health system, may have made some contribution to it?

Here’s the graph of weekly case growth, stringency and R-rate. 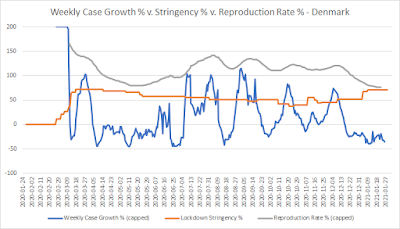 The lockdown measures they have taken seem to be similar to other European countries. Though for much of the time, according to the Blavatnik measure, Denmark has been among the more lightly locked down countries in the area. Indeed, through November and December, Denmark was at the very bottom of the lockdown stringency list.

Currently, Denmark is in 10th place out of my 14 countries at 70%. Only France, Switzerland, Belgium and Luxembourg are lower. But even if recent measures made a difference – and that fall in the reproduction rate suggests that they did! – that doesn’t explain why Danish deaths per case are so low.

The Danish health care system is essentially run by regional and local governments. It is well funded at 10 per cent of GDP (in 2018); similar to the UK. And despite the low number of hospital beds, the hospitals are particularly well funded, at 43% of all health expenditure. Notably, in 2015, the Danish government took active steps to de-centralize decision making in the health care system. I suspect this may have some relevance to the strength of their performance (so far) in the COVID-19 epidemic.

Remarkably detailed Neil. I do find it hard to follow the graphs - being colourblind.
I was very impressed with Denmark when I visited. The standard of life was very high. I think that has a lot to do with it. Good social provision - not the slums and ghettos, poor work conditions, poverty - good social support.

Thank you, Opher. Yes, the graphs can be a bit hard to follow, can't they? That's why I often show the histograms, and sometimes give a verbal account too, so the reader can work out which spaghetto (singular of spaghetti?) is which.

I confess that Denmark is, among all my 14 countries, the one about which I know least from personal experience. I went through Denmark on two return trips by train from Holland to Sweden, and I stopped off for 12 hours in Copenhagen on one of those journeys. But that's it.

I had also planned to publish some local new cases figures from around my area - there is a website which has started publishing new cases broken down by individual borough. But unfortunately, the data for the most recent week (up to February 2nd) isn't available yet. I think this may be because the government's "COVID dashboard" has broken down - when I looked yesterday, it was still only showing data up to January 30th.