A moan I frequently hear these days is that the old left versus right scale of political views doesn’t seem to be meaningful any more. Are the British National Party, for example, far left wing or far right wing? Or what about those like me, who tend towards the “right” on economic matters, and towards the “left” on other things like civil liberties and immigration?


Of course, there have been many attempts to rectify this problem. People have created scales, or 2-D or 3-D charts, in efforts to make a better map of the political world. Of these, the one I know best is the Nolan Chart.


So today, I’m going to begin with the Nolan Chart. Then, following my usual inclination, I’m going to bend it into something all but unrecognizable. And I’m going to claim that my version (which I call the LTPC chart; not to be confused with LGBT) is the best political map since sliced bread.


But David Nolan saw that things weren’t actually as simple as they looked. And he saw that he could plot people’s levels of desire for personal and economic freedom on a two dimensional graph. So in 1969, he came up with this chart (Figure 1): 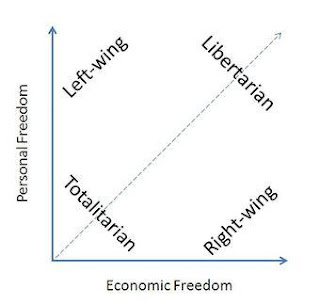 
This chart included two political outlooks, beyond left and right. First, in the top right corner, “Libertarian,” originally meaning “an advocate of the doctrine of free will.” This word had also been taken on as a self-description by a new political group, to whom Nolan himself belonged. They desired both personal and economic freedom for all, but felt they could not call themselves “liberals” because the US political left had already appropriated that term. Second, in the bottom left corner, Nolan put “Totalitarian,” meaning someone who doesn’t want to allow others any freedom at all, personal or economic.


There is – literally – a stroke of genius in this chart, which few of Nolan’s followers seem to have appreciated. That diagonal line, from the origin via the long T word to the long L word, is a new axis. And it measures something important; it measures desire for freedom. More on that later.


After the first publication of the Nolan Chart in 1971, many different variants of it were made. If there is one version which I feel best encapsulates the whole idea, it is the one below (Figure 2): 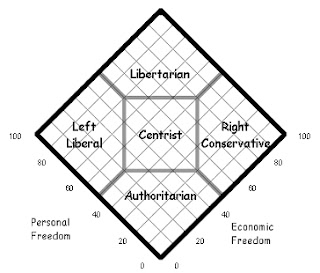 
This version shows three changes from the original. First, it has been rotated anti-clockwise through 45 degrees. The credit for this goes to Marshall Fritz. (He also bears much of the responsibility for bringing me into the liberty movement back in 1988. But that’s another story).


The second change is the introduction of a new “Centrist” cell. And the third is re-wording. “Left” and “Right” have been supplemented by the more common US political labels, “Liberal” and “Conservative.” And “Totalitarian” has been replaced by the somewhat softer “Authoritarian.”


My version of the Nolan Chart


Idly pondering these ideas – as one does – I came, one day, to appreciate a spark of genius in the chart. If you plot an individual’s scores for personal and economic freedom on Figure 2, you place them at a particular point on the chart. If, instead, you take the average of the two scores and plot that along the top to bottom axis, you are projecting (in the mathematical sense) this point horizontally on to the vertical, Libertarian to Authoritarian scale.


What this means is that horizontal lines on this form of the Nolan chart are lines of constant desire for freedom, whether that desire is for personal freedom, economic freedom, or a mixture of the two. This made me want to create my own version of the chart, in which horizontal lines would play a major part in delineating the cells.


I also wanted to try to make the chart a bit easier to understand for a European or worldwide audience. And I wanted to restore “liberal” to its proper place at the apex. (I’ve never liked the word “libertarian” as a political label. I prefer to identify myself as a true liberal – as opposed to the leftist fake or faux liberals.)


The result was the following (Figure 3): 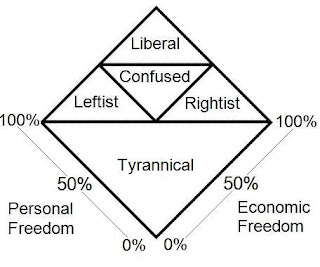 Figure 3 – My version of the Nolan Chart


How did I come up with this? Well, first I picked a minimum level of desire for freedom of 75% (combined score of 150) as the lower limit of what I would rate as Liberal. My choice of this value wasn’t arbitrary; I picked it because it would allow me to make a chart in which all cells were triangular. This gave me the triangle at the top of the diagram.


Next, I picked a maximum level of 50% (combined score of 100) as the upper limit for the bad boys and girls. The reasoning behind this was that anyone that wants to see more un-freedom than freedom is a bad ‘un. So I drew that horizontal line right across the middle. I then had to decide what to call the bottom cell. No longer feeling restricted to words ending –arian, I at first thought about “statist.” But eventually, I asked myself: What is the opposite of liberty? Tyranny. So what is the opposite of liberal? Tyrannical. Licking my chops at the thought of being able to call my enemies “tyrannicals,” I wrote the word Tyrannical in that bottom cell.


Lastly, I took two of the lines from Figure 2 (one of 50% personal freedom, the other of 50% economic freedom) and used them to join up my two horizontal lines. This divided the portion of the chart between my two lines into three triangles. The left and right cells I called, unsurprisingly, Leftist and Rightist. For the centre cell, I contemplated Moderate; but eventually settled on a word which, I think, describes rather well the mind-set of those whose position lies in this centre cell. That word is “Confused.”


While my version doesn’t change the number of cells, and doesn’t greatly change their positions on the chart, it did prompt a new idea. That is, that the closest people to us true liberals are neither leftists or rightists, but the Confused. And yet, most of us prefer to try our outreach to those already politically conscious, either on the left or right. Perhaps we should be devoting more of our time trying to reach the Confused or uncommitted?


Next, I added to my version of the Nolan Chart an explicit representation of the vertical Liberty/Tyranny axis. The result was Figure 4 below. 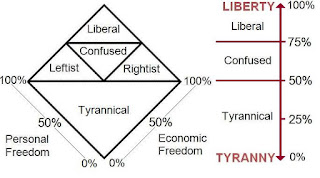 
The axis at the right represents the horizontal projection of an individual’s position on the chart on to a scale, whose ends are Liberty and Tyranny. And the numbers at the extreme right measure the average of the two scores, the overall level of desire for freedom, on a scale of 0% to 100%.


I then divided this new axis into three segments, corresponding to the two horizontal lines on my version of the chart. The 75% to 100% segment, obviously, I labelled Liberal. and the 0% to 50% segment Tyrannical. For the 50% to 75% segment, though, I had a decision to make. Thinking that anyone who doesn’t know whether they are liberal or tyrannical has got to be a bit confused, I eventually settled on the easy option; Confused.


Et voilȁ! I had created the Liberty/Tyranny Axis. So now, our political map is back to a single axis, one which measures desire for freedom. 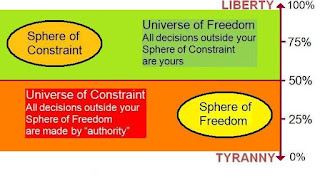 Figure 5 – Spheres and Universes of Constraint and Freedom


Starting at the very top of the scale, radical anarchists posit a Sphere of Constraint which is vanishingly small. Next come “thin” libertarians, who put into the sphere of constraint just one single ethical obligation, the so called non-aggression principle. A little further down are minarchists like myself, who seek the minimum constraint consistent with civilized behaviour. For example, upholding objective justice and the rule of law; keeping to contracts you have freely entered into; respect for the human rights and freedom of other human beings; truthfulness and honesty. And further down still, in the Confused area of the axis, are very many well-meaning people. who have not yet seen through the façade of “democracy” to the moral maelstrom that lies beneath.


As you pass the 50% point, an inversion, or what I call a “philosophical flip-flop,” takes place. It’s like a glass turning from half full to half empty. Below the 50%, the individual’s sphere of freedom, though it starts fairly large, steadily shrinks. Until, near the bottom, you reach ideologies like socialism, communism and nazism, which are authoritarian verging on totalitarian.


To return to my main theme. Looking back and comparing Figure 4 with Figure 2, I’ve (by design) eliminated Left and Right. I’ve moved Liberal to its rightful place. I’ve replaced Authoritarian by Tyrannical, and Centrist (with a small upward shimmy) by Confused. But there is one word on Figure 2 I haven’t yet dealt with. That word is Conservative.


What is the opposite of Conservative? I think the answer is Progressive. Indeed, many on the US political right use this word as a pejorative synonym for left-liberal. And what are the main differences in viewpoint between progressives and conservatives? I see four:


So, I took away my version of the Nolan chart from the left side of Figure 4, leaving only the Liberty/Tyranny Axis on the right side. I then drew a new horizontal axis at the bottom on the left side, with a scale of plus 100% (extreme progressive) to minus 100% (extreme conservative). The middle of the scale – those perfectly balanced people who can take progress, or lack of it, with equanimity – is represented by 0%.

Lastly, I divided the new chart into six boxes, according to the labels on the two axes. Liberal, Confused and Tyrannical on the vertical axis, and Progressive and Conservative on the horizontal. The result was Figure 6: 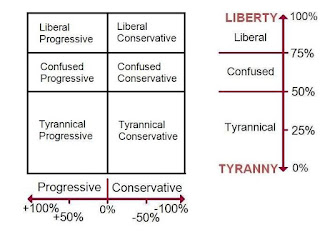 I will conclude by trying to paint, on my LTPC chart, my (cynical and jaundiced) view of the current state of party politics in the UK – since that’s what I’m familiar with. I’ve ignored the nationalist parties, since I live in England. My effort is Figure 7 below. But, if you want to, you can do the same for any other country in the world. 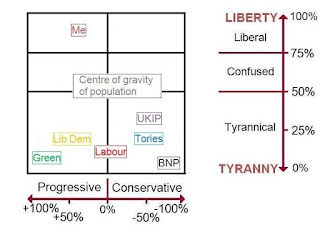 Some things to note: