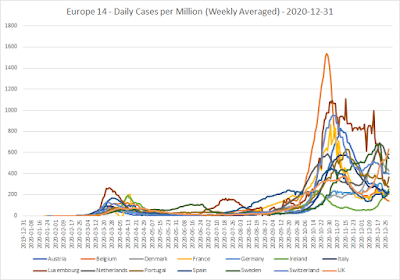 This is an update to my paper of December 3rd on tracking the COVID-19 epidemic in fourteen Western European countries. It uses the data up to and including December 31st 2020. The data sources are the same as before: Our World in Data and the Blavatnik School of Government, both at Oxford University.

The main news this month, apart from seemingly never-ending lockdowns and the ghost of Christmas passed, has been the new, supposedly more easily transmissible strain of the virus, discovered in the UK. Initially, I was a bit skeptical. But as you can see in the graph at the top, the UK (pink line) does indeed have a climbing trend in new daily cases, which over the whole of December is very different from the trends in the other countries. So, I think we can fairly say that there is indeed a new, more transmissible strain, in the UK and perhaps some other countries.

In other news, no sooner had I changed all my “magic spreadsheets” to use the newly added reproduction rate (Rt) data column, than all 14 countries stopped reporting this data! There has been no Rt data for any of them since December 4th. I had already noticed that the Rt looked as if it was being calculated differently in different countries. So, perhaps they got together and decided the Rt values weren’t fit for purpose. A great pity, since it is (would be) one of the most interesting statistics of all at the present stage of the epidemic. It will be interesting to see whether, and if so when, they resume providing this data.

Here is the list of daily cases per million as at the end of the month:

The UK, Sweden, Netherlands and Denmark are leading the pack. And every country except Belgium is now above the WHO’s “naughty boy, you mustn’t unlock” threshold of 200 new cases per million population per day. Yet many of the countries are under more severe lockdown than they were a month ago. This suggests to me that the WHO’s threshold is too low for its apparent purpose. Making me think, might it have been better to base any assessment of “high risk” status on hospital occupancy figures, rather than simply on cases? 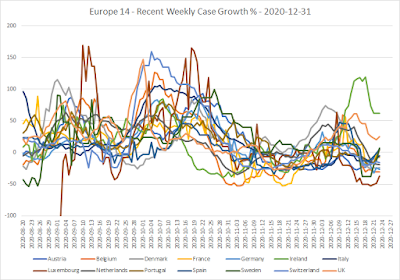 Ireland is now at the top in weekly case growth, suggesting that it too may have a more transmissible strain of the virus. The UK is second. The next group seem to be a mixture. Some have weekly case growth negative and roughly static. Others have recently turned a corner back towards, and in some cases even into, positive case growth. I wonder if this may be a “Christmas effect?” Again, time will tell.

Here’s the histogram of who is where:

And the latest lockdown stringency graph: 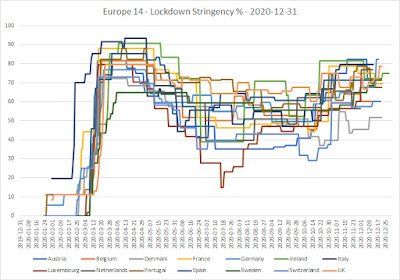 The issues, which were causing the UK stringency not to include measures which were only in place in individual constituent countries, do appear to have been fixed. The ordering of the stringencies is also worth a look. I haven’t seen Germany up at the top before! And the stringent lockdown in the UK is clearly not succeeding at slowing the rise in new cases.

For tests, I’ll show the graph of cumulative tests per 100,000. This shows that, with the exception of Denmark in second place, none of the countries have in the last few weeks been greatly increasing their testing rates. 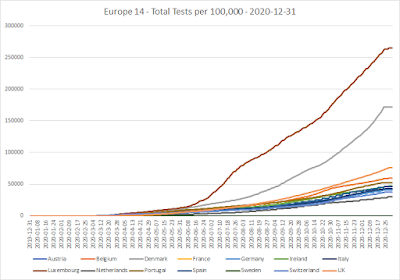 And here is the graph of cumulative cases per test over the course of the epidemic: 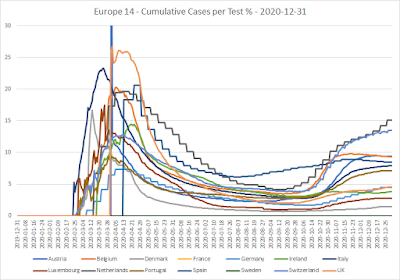 The countries divide into four groups. In the Netherlands, Switzerland and perhaps Germany, cumulative cases per test are still rising. In the UK, Ireland and Denmark, the rate, which had all but levelled off, started to rise again during December. In Belgium and Spain, the rate is now falling. The rest seem to be staying roughly constant.

The daily deaths per million graph is inconclusive: And the deaths per case, with a 21-day offset, tell us that several countries have had a bad December in this regard; most of all the UK, Belgium, Germany and France. 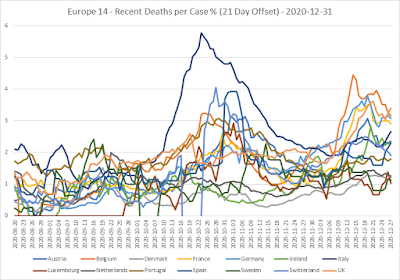 I decided that, at this point, it isn’t worth reviewing again the effects of lockdown actions in individual countries since the beginning of December. One more month seems insufficient time to make any clear judgements, and the figures will have been distorted by Christmas (and will be further distorted by the New Year). I plan to take another look towards the end of January. By which time, I will hopefully be able to show also some data on hospitalizations and vaccinations.